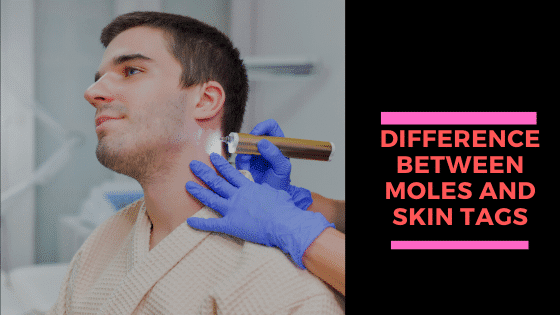 Moles and skin tags are two of the most common skin blemishes. While most of the time they are benign, they can be unsightly and irritate. Since many people don’t know the differences between them, they don’t know when it’s appropriate to seek out medical attention.

So what is the difference between moles and skin tags?

The most crucial difference is that moles are formed when melanocytes skin cells cluster in one spot. Skin tags are small benign tumors that tend to grow in places where the skin rubs together.

As stated above, moles are clusters of skin cells that can appear anywhere on the body. Most people get all of their moles before the age of 25, and the average person has 10-20 moles. They grow slowly over the years and can be flat, but they are more often raised. They are usually symmetrical and circular in shape and black or brown. Moles can change over time, especially in women after they have children.

Skin tags tend to form in creases or where the skin rubs together. Armpits, where thighs touch, and in the creases of your elbows and behind the knee are the most common places. They are benign tumors, or growths, that are typically painless as well. Unlike moles, which are dark, skin tags should be a close shade to your skin tone.

Most moles are called common moles and don’t cause any issues. They are usually smaller than the diameter of a pencil eraser and have even edges and coloration. Atypical moles are larger than a pencil eraser, aren’t evenly shaped, and have multiple colors. They can fade from dark brown, black, pink, or even tan colors throughout. Congenital moles are moles that are there when you are born. They can be any size and can increase the risk of melanoma. A Spitz nevus is a pink mole that is shaped like a dome. It should be watched closely for changes. An acquired mole is a mole that shows up on the skin after birth.

Are moles or skin tags cancerous?

Moles themselves are not cancerous, but they can develop into cancer. When the melanocytes are damaged, they can grow into irregular shapes and become melanoma. The most important factors to watch out for are asymmetry, border, color, diameter, and evolving. These factors are considered the ABCDE’s of skin cancer. If your mole starts to change shape, bleeds, gets a scaly texture, changes color, or grows larger, it’s time to get checked by a dermatologist.

While skin tags are small tumors with fat, skin, and nerve cells, they are not cancerous. They are usually so little that they go unnoticed. They are not likely to become cancerous, unlike moles, but if you notice any strange changes, it doesn’t hurt to get it checked out by a dermatologist.

When should you get a mole or skin tag removed?

Since skin tags are not harmful, most people choose to live with them. However, they can grow large and so it is possible to ask your doctor to remove them. It’s a simple procedure that can usually be done in a dermatologist’s office. The most common ways to remove a skin tag are to freeze them off with liquid nitrogen or to cauterize them. If your skin tag bleeds, gets infected, or if there is redness or swelling on or near it, these are all signs that you should see your doctor.

Moles are a little more tricky. If you have a mole that looks off, your doctor will first evaluate its size and shape. Typically, they will complete a full-body assessment to determine if there are any other moles of concern. Anything they believe to be precancerous or cancerous, they will biopsy and have tested. Those moles will often be removed in layers at a single appointment to ensure they get all of the cancerous cells. Depending on how deep cancer goes, you may need additional plastic surgery to reduce the appearance of the spot where the cancer was removed. Another method is to stitch the hole closed if possible.

Can you prevent moles or skin tags?

Yes and no. You can reduce the risk of both moles and skin tags from forming, but there isn’t anything you can do to prevent them 100% of the time.

Moles are influenced by sunlight. Because of this, the best way to reduce the likelihood of getting new ones is to reduce your sun exposure, especially on your face. Facial moles get the most sun exposure, which makes them susceptible to growing larger and turning into cancer. It’s essential to use a quality sunscreen with at least SPF 15 and a hat if you are outside for an extended amount of time. Don’t forget to reapply the sunscreen every 2 hours or so and try to avoid the sun during the harshest parts of the day, which is 10 a.m.-4 p.m.

If you or a close relative have a history of skin cancer, it’s best to wear sun-protective clothing on your arms and legs as well. Suitable clothing will not only reduce your risk of getting new moles, but it will also reduce the risk of the moles you have from becoming cancerous.

Since skin tags are formed by rubbing, especially skin against skin, you can minimize your risk of getting one if you do a few things regularly. It’s best to wear clothing that is soft and breathable. Don’t let your skin rub against itself too often. Leg chaffing from your thighs touching can lead to skin tags, so wear shorts, pants, or leggings that don’t allow your skin to touch.

It’s not too hard to tell the difference between the average mole and the average skin tag. It’s vital to know how changes to either one of them can affect your health, so you know when to seek medical attention.