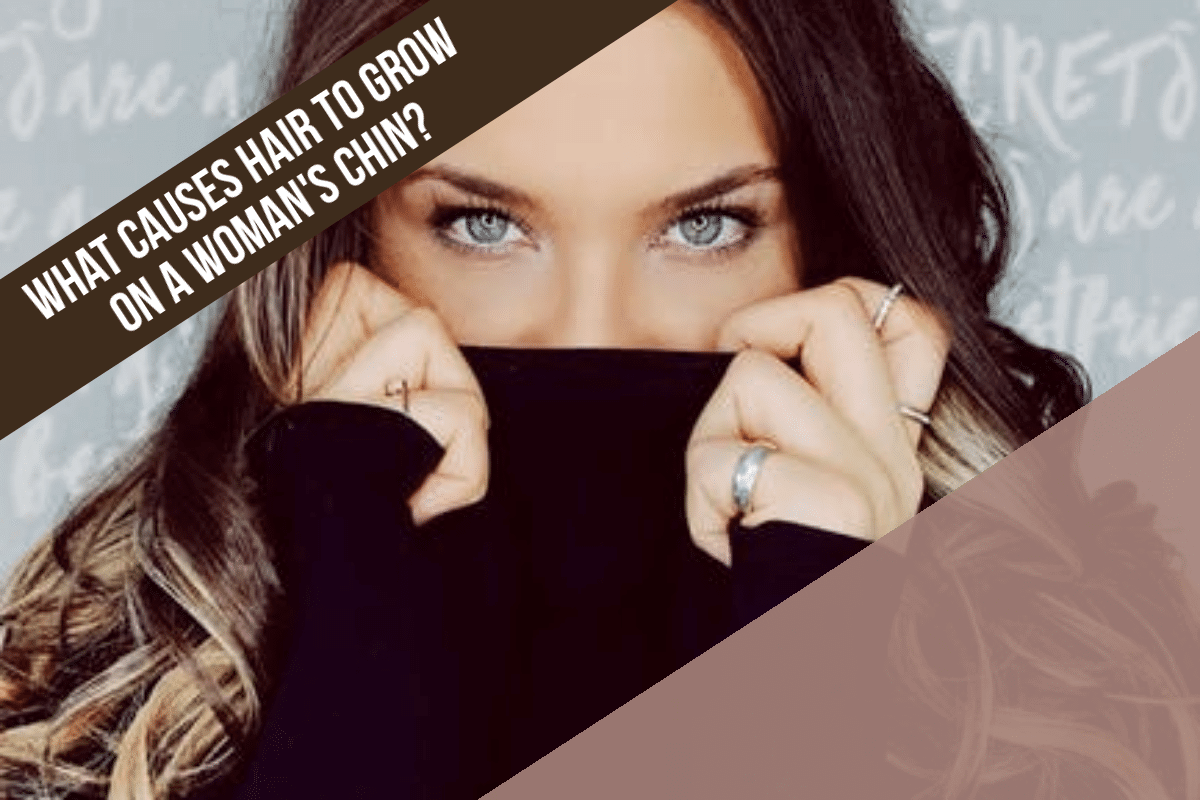 Women are always concerned about how we look.

Although our whole appearance matters, most of the time the focus is on the face. That’s why an unusual change can be a matter of concern.

Although women don’t have usually have full-grown beards, the development of chin hair is not something unusual. It’s common to see a few visible strands of hair standing out from time. Every woman has a few strands of hair on their chin. This is a normal occurrence even though it’s not highly visible.

Tiny and light-colored hair helps to regulate the body’s temperature. But there are some instances where the growth is sudden, excess, and unwanted.

So, what causes hair to grow on a woman’s chin?

Hair due to Hormonal Changes

This is the number one cause of the growth of chin hair in women. For instance, during puberty, the body may experience an increase in the level of androgen hormone. As a result, this hormone causes the hair follicles to enlarge. The eventual result is the growth of darker and coarser chin hair.

Naturally, every human being has androgen. However, men have more androgen than women. And it’s for this reason that their facial features involve the growth of excessive chin hair.

When there are hormonal imbalances, women will end up also developing chin hair, just like men. Apart from puberty, other causes that may lead to hormonal changes include pregnancy and changes in the environment.

A slight change in both female and male sex hormones can easily create an imbalance. This may lead to the rapid growth of facial hair in areas such as the chin.

Although this is not very common, there are certain medications that can cause hair to grow on a woman’s chin.

Evidence suggests that some drugs for epilepsy and chemotherapy can cause hair growth. Besides that, there are class C drugs that have proved to also cause this.

When women use illegally bought anabolic steroids for gym or sports, they risk developing facial hair. So, if you are a woman and want to use a class C drug, make sure that it’s prescribed and purchased from a verified pharmacy.

Rapid and massive weight changes are another cause of hair growth on a woman’s chin.

Research has established that a significant weight gain or weight loss coincided with the growth of chin hair in women. Obesity, for instance, causes an imbalance in both male and female hormones. Note that even a small hormonal imbalance has a huge impact on the growth of facial hair.

Additionally, extreme and rapid weight loss can cause the growth of fine chin hairs.

Fine chin hairs are often a giveaway sign of anorexia.

The growth of chin hair is prevalent in older women. It is even more prevalent after menopause. The older you get, the hairier your body becomes. One of the areas that you will notice is getting hairier is your chin. This is because, at this stage, the body produces a lower level of estrogen.

The growth of chin hair in women could also be a sign of health problems. This could be a serious indicator of an underlying issue that’s undetected.

When there is a sudden and excessive growth of facial hair on an area such as the chin, this condition is normally referred to as hypertrichosis or more specifically in women, hirsutism.

This medical condition can be caused by several health problems such as:

PCOS is the number one cause of hirsutism. This is a serious and common medical condition affects which affects almost 12 percent of American women who are of childbearing age.

PCOS affects the ovaries by causing irregular periods, high levels of male hormones, and sparking the growth of tiny ovarian cysts. It may also result in weight gain which, as mentioned above, may spark the unwanted growth of chin hair in women.

They affect the adrenal glands and ovaries. Although these tumors are not very common, they cause serious side effects. They are associated with hirsutism which causes excessive hair growth in women.

These androgen-secreting tumors may be accompanied by high levels of testosterone. And it’s known that a high level of male hormone in a woman’s body may easily lead to the growth of chin hair.

This is a mild form of congenital adrenal hyperplasia. NCAH is a genetic disorder that affects women later in life. The rare medical condition has no earlier symptoms and it’s not so common.

The rapid growth of excess facial hair such as chin hair is one of the main symptoms of this disease. It may also cause menstrual irregularity, a symptom that’s also associated with PCOS.

Women who suffer from this condition have high chances of growing excessive chin hair.

The growth of excess chin hair in women can be genetically based. If your mother or grandmother has visible chin hair, chances are that you might also develop it.

It’s clear that there are numerous factors that can make women grow chin hair. Some of them are harmless while in some instances it may be an indication of a serious health problem.

Generally, it’s normal to have some chin hair. A lot of women, in fact, treat it as an issue that relates to cosmetics. So, they opt to go for treatment options such as laser, waxing, or plucking.

However, if you have excessive hair growth on your chin that is causing you to worry, then you need to seek professional medical attention. This should be a matter of concern, especially if the sudden growth of chin hair is accompanied by other symptoms.